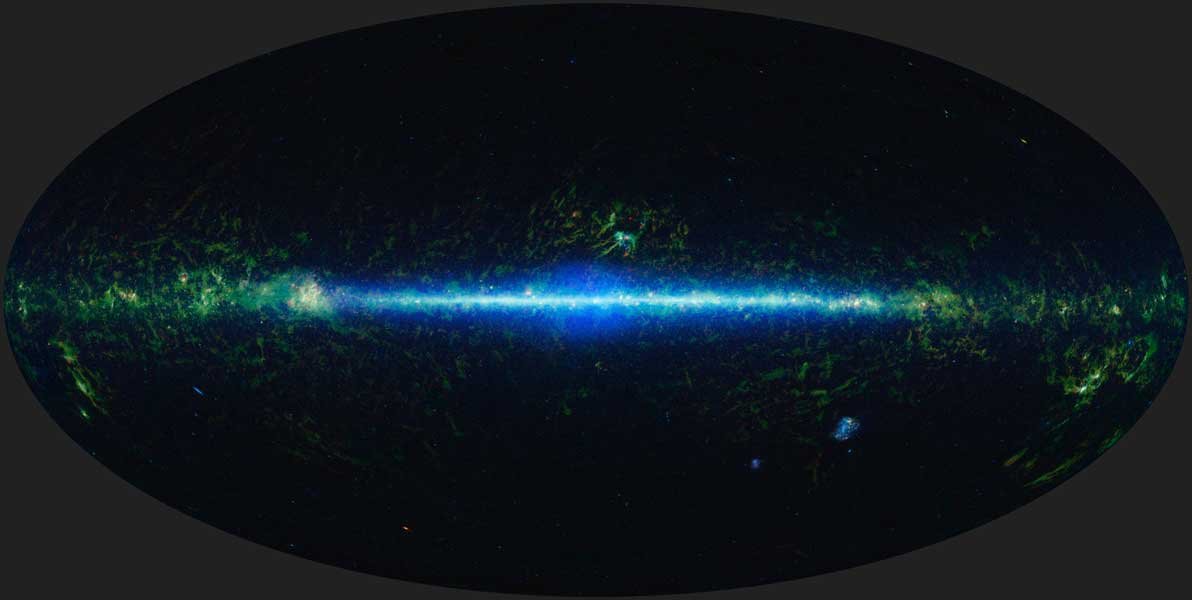 This mosaic is composed of images covering the entire sky, taken by the Wide-field Infrared Survey Explorer (WISE) as part of WISE’s 2012 All-Sky Data Release. By observing the entire sky, WISE can search for faint objects, like distant galaxies, or survey groups of cosmic objects.
Credit: NASA/JPL-Caltech/UCLA

Pictures of the sky can show us cosmic wonders; movies can bring them to life. Movies from NASA’s NEOWISE space telescope are revealing motion and change across the sky.

Every six months, NASA’s Near-Earth Object Wide Field Infrared Survey Explorer, or NEOWISE, spacecraft completes one trip halfway around the Sun, taking images in all directions. Stitched together, those images form an “all-sky” map showing the location and brightness of hundreds of millions of objects. Using 18 all-sky maps produced by the spacecraft (with the 19th and 20th to be released in March 2023), scientists have created what is essentially a time-lapse movie of the sky, revealing changes that span a decade.

Each map is a tremendous resource for astronomers, but when viewed in sequence as a time-lapse, they serve as an even stronger resource for trying to better understand the universe. Comparing the maps can reveal distant objects that have changed position or brightness over time, what’s known as time-domain astronomy.

New time-lapse movies from NASA’s NEOWISE mission give astronomers the opportunity to see objects, like stars and black holes, as they move and change over time. The videos include previously hidden brown dwarfs, a feeding black hole, a dying star, a star-forming region, and a brightening star. They combine more than 10 years of NEOWISE observations and 18 all-sky images, enabling a long-term analysis and a deeper understanding of the universe.
Credit: NASA/JPL-Caltech; WISE-NEOWISE movies compiled by Dan Caselden

“If you go outside and look at the night sky, it might seem like nothing ever changes, but that’s not the case,” said Amy Mainzer, principal investigator for NEOWISE at the University of Arizona in Tucson. “Stars are flaring and exploding. Asteroids are whizzing by. Black holes are tearing stars apart. The universe is a really busy, active place.”

NEOWISE was originally a data processing project to retrieve asteroid detections and characteristics from WISE – an observatory launched in 2009 and tasked with scanning the entire sky to find and study objects outside our solar system. The spacecraft used cryogenically cooled detectors that made them sensitive to infrared light.

Not visible to the human eye, infrared light is radiated by a plethora of cosmic objects, including cool, nearby stars and some of the most luminous galaxies in the universe. The WISE mission ended in 2011 after the onboard coolant – needed for some infrared observations – ran out, but the spacecraft and some of its infrared detectors were still functional. So in 2013, NASA repurposed it to track asteroids and other near-Earth objects, or NEOs. Both the mission and the spacecraft received a new name: NEOWISE. 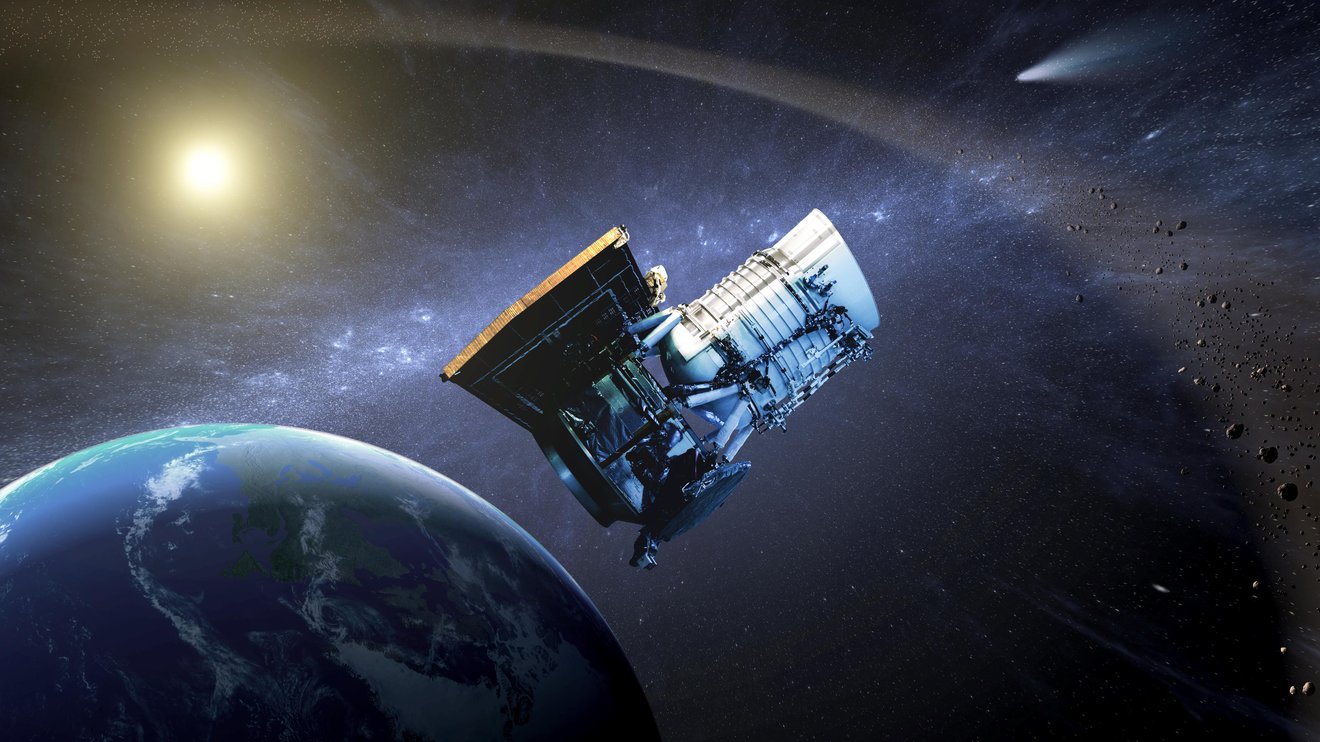 This illustration shows the Wide-field Infrared Survey Explorer (WISE) spacecraft in Earth orbit. The WISE mission concluded in 2011, but in 2013 the spacecraft was repurposed to find and study asteroids and other near-Earth objects (NEOs). The mission and spacecraft were renamed NEOWISE.
Credit: NASA/JPL-Caltech

Despite the shift, the infrared telescope has continued to scan the sky every six months, and astronomers have continued to use the data to study objects outside our solar system.

For example, in 2020, scientists released the second iteration of a project called CatWISE: a catalog of objects from 12 NEOWISE all-sky maps. Researchers use the catalog to study brown dwarfs, a population of objects found throughout the galaxy and lurking in the darkness close to our Sun. Although they form like stars, brown dwarfs don’t accumulate enough mass to kick-start fusion, the process that causes stars to shine.

Because of their proximity to Earth, nearby brown dwarfs appear to move faster across the sky compared to more distant stars moving at the same speed. So one way to identify brown dwarfs amid the billions of objects in the catalog is to look for objects that move. A complementary project to CatWISE called Backyard Worlds: Planet 9 invites citizen scientists to sift through NEOWISE data for moving objects that computer searches might have missed.

During the asteroid's March 2021 close approach, JPL astronomers used NASA's 230-foot (70-meter) Goldstone Solar System Radar in California to image and precisely measure the asteroid's velocity and distance. These observations, combined with measurements from other observatories, enabled astronomers to refine Apophis' orbit and rule out a 2029 impact for the purpose of the exercise. (Beyond the exercise, they also were able to rule out any chance of impact for 100 years or more.)

With the original two WISE all-sky maps, scientists found about 200 brown dwarfs within just 65 light-years of our Sun. The additional maps revealed another 60 and doubled the number of known Y-dwarfs, the coldest brown dwarfs. Compared to warmer brown dwarfs, Y-dwarfs may have a stranger story to tell in terms of how they formed and when. These discoveries help illuminate the menagerie of objects in our solar neighborhood. And a more complete count of brown dwarfs close to the Sun tells scientists how efficient star formation is in our galaxy and how early it began.

Watching the sky change over more than a decade has also contributed to studies of how stars form. NEOWISE can peer into the dusty blankets swaddling protostars, or balls of hot gas that are well on their way to becoming stars. Over the course of years, protostars flicker and flare as they accumulate more mass from the dust clouds that surround them. Scientists are conducting long-term monitoring of almost 1,000 protostars with NEOWISE to gain insights into the early stages of star formation.

NEOWISE’s data has also improved understanding of black holes. The original WISE survey discovered millions of supermassive black holes at the centers of distant galaxies. In a recent study, scientists used NEOWISE data and a technique called echo mapping to measure the size of disks of hot, glowing gas surrounding distant black holes, which are too small and too distant for any telescope to resolve.

"We never anticipated that the spacecraft would be operating this long, and I don’t think we could have anticipated the science we’d be able to do with this much data," said Peter Eisenhardt, an astronomer at NASA’s Jet Propulsion Laboratory and WISE project scientist.

More About the Mission

For more information about WISE, visit: